It is with great pleasure to announce restart of live Twitter IPNA Journal Club under the hashtag #IPNAJC.

The first round starts on 14 and 15 July and will cover three time zones (USA Eastern time, Central European summer time and India standard time)  allowing global participation and that everyone can join the discussion.

The first topic was picked to appeal to both paediatric nephrology community and our adult nephrology colleagues. Details of the first paper and summary with visual abstracts will be published here soon.

Please follow IPNA Journal Club on Twitter under @ipnajc for the latest news and first topic reveal. Please share this news to promote further paediatric nephrology education brought to you by IPNA.

Alport syndrome in children: moving towards early diagnosis and treatment

Alport syndrome (AS) is a hereditary kidney disease resulting from defective or absent α3.α4.α5 chains of type IV collagen in the glomerular basement membrane (GBM), eye, and cochlea.

In contrast, the genotype-phenotype correlation is not observed in females with XLAS.

ARAS also carries a high risk of ESKD by age 30. Data on genotype-phenotype correlation in ARAS is more limited.

ADAS progresses slower than the other two types.

Here is an infographic summarizing genotype-phenotype relation in AS by M. Malina 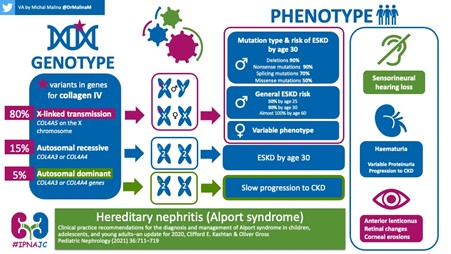 AS progresses through a consistent series of phases that vary in duration according to genotype. An initial phase of isolated hematuria is followed by microalbuminuria, then overt proteinuria, and eventually progresses to kidney failure.

ACEi therapy is most effective when initiated before kidney function decline and delays ESKD and the need of kidney replacement therapy (KRT) by years or decades.

Animal mouse models of AS

Another study compared ramipril to candesartan (an angiotensin receptor blocker) and placebo. Ramipril increased lifespan by 111% while candesartan increased only by 38%.

Clinical trials in AS

Retrospective cohort studies in patients with AS

Among patients with heterozygous mutations in any of the 3 genes, treated patients showed a lower incidence and later age at kidney failure and improved survival, compared to untreated patients.

Genotype appears to also influence response to therapy. In a large cohort of XLAS males in Japan, treatment with ACEi or angiotensin receptor blockers (ARB) was associated with a mean age at kidney failure of >50 years, compared to 28 years in untreated patients. In patients with non-truncating variants, treatment delayed kidney failure by 17 years and by 12 years in patients with truncating variants compared to untreated patients.

Prospective studies in patients with AS

The EARLY PRO-TECT trial addressed the question whether initiation of ACEi therapy at the early stage of hematuria with or without microalbuminuria can delay progression to more advanced disease. The trial included a randomized, placebo-controlled arm and open-label cohorts of treated and untreated children with follow-up as long as 6 years. Primary outcome measure was progression to the next phase of disease. Ramipril reduced progression by >40% in both randomized and open-label arms.

In summary, there is mounting evidence that early ACEi improves kidney outcomes in AS. Thus, there is a need to start early treatment, which requires an early diagnosis.

Here is the infographic summarizing clinical trials by Shweta Shah. 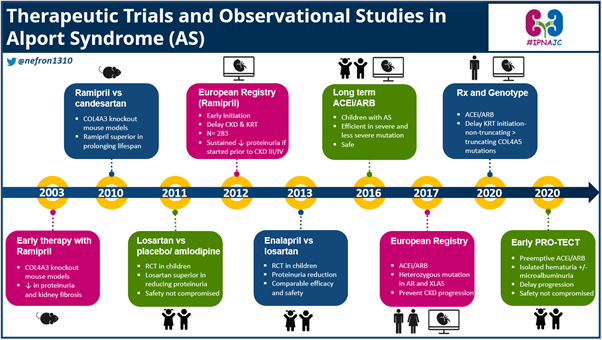 The majority of children with isolated glomerular hematuria with fall in one of four categories:

In AS, the most common presentation is asymptomatic microscopic hematuria.  Therefore, the authors advocate that a specific diagnosis be pursued in every patient with isolated glomerular hematuria and propose an ideal approach (see algorithm below). 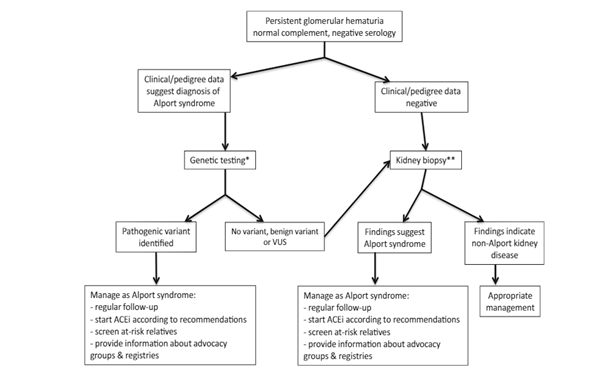 1) A negative family history does not exclude AS.

2) A positive family history of CKD is not proof of AS.

3) Absence of specific findings (hearing loss or ocular abnormalities) does not exclude AS as the extra-renal findings are dependent on age, genotype and biological sex.

4) Finding a TBM on EM does not guarantee non-progressive disease.

5) Some patients with clinical and pathological findings of AS may have negative genetic testing.

A significant percentage of patients with histologic focal segmental glomerulosclerosis (FSGS) are found to have pathologic collagen IV gene variants and should be diagnosed with AS. These patients should not be treated with immunosuppressive medications.

The ultimate goal is to maximize early diagnosis of AS in order to initiate treatment in every patient that can benefit from delaying progression to kidney failure.

The authors postulate that the onset of microalbuminuria identifies patients at significant risk of progression to CKD and kidney failure and recommend starting ACEi/ ARB therapy in these patients.

BP goal of ~50th percentile in patients with AS.

Males with XLAS (risk of detectable hearing loss of 30% by age 10) and children with ARAS (risk of 20% by age 10) should start formal hearing evaluation at age 5 -6 years with annual follow up.

Females with XLAS (risk <10% before age 40) should be evaluated if they develop overt proteinuria or when hearing impairment is suspected clinically.

Patients with ADAS should be evaluated if there is clinical suspicion of hearing impairment.

Males with XLAS (with truncating variants) and patients with ARAS should begin evaluation by ~15 years of age.

Females with XLAS and patients with heterozygous variants for COL4A3 and COL4A4, should be evaluated if clinical suspicion.

Females who are menstruating must use effective contraception to avoid fetopathy due to ACEi. 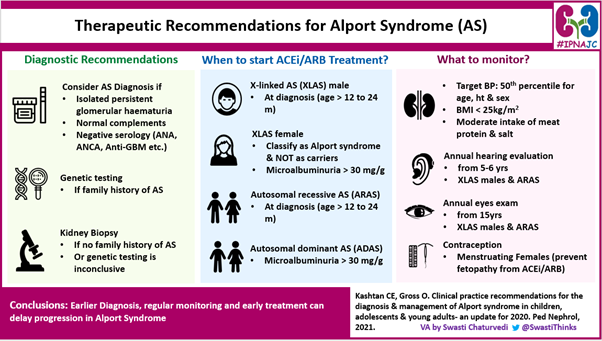 In subjects treated for microalbuminuria, the recommended target is <50-100 mg/g creatinine. If urine protein levels persist at higher levels despite treatment, it is recommended to continue therapy with first and second-line agents.

Note: dosing regimen does not consider level of albuminuria or proteinuria

There are no studies in human AS that correlate the degree of proteinuria and functional kidney outcomes. There is limited data on efficacy and safety of dual blockade in the pediatric population. Adding losartan in one study reduced proteinuria by ~60%. In the EARLY PROTECT study, a reversible acute kidney injury (AKI) occurred in a child with dual blockade. 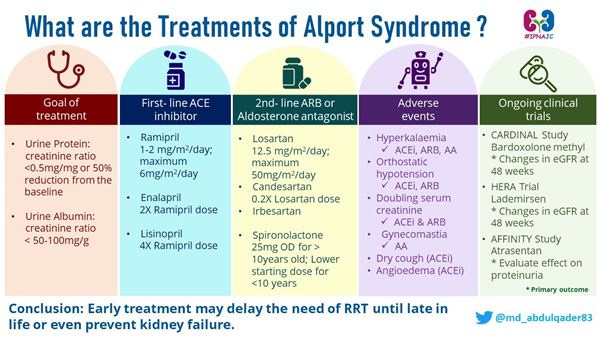 Early treatment may delay the need of KRT until late in life or even prevent kidney failure. RAAS inhibition can delay the disease progression but does not cure the disease, which is the ultimate goal.

Don’t worry we have your back.

Here is a simple guide adapted from NephJC 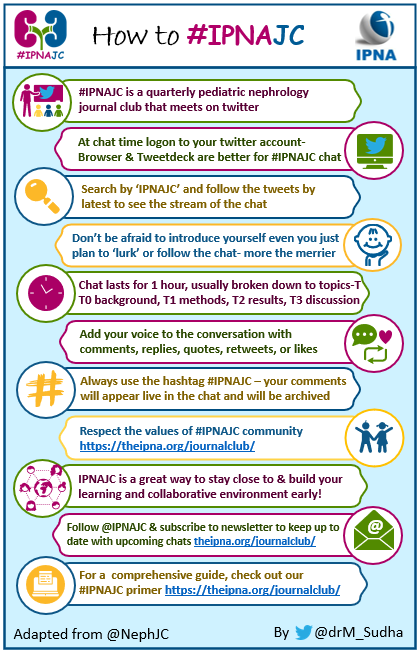 This code of conduct, adapted from NephJC to guide us toward pleasant discussions during our interactions in IPNAJC chat. We believe that this will make us an effective teaching environment filled with fun, mutual respect and collaboration. 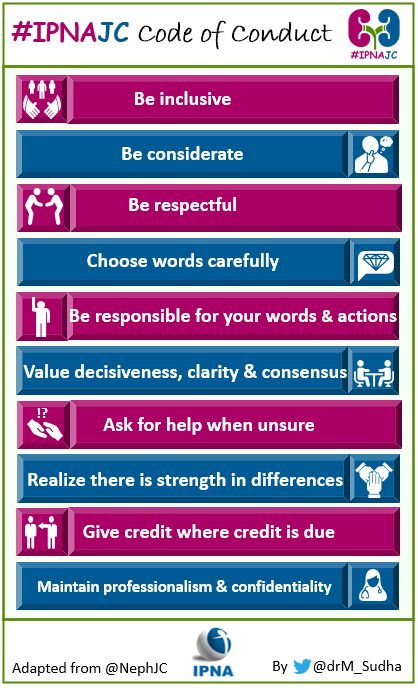 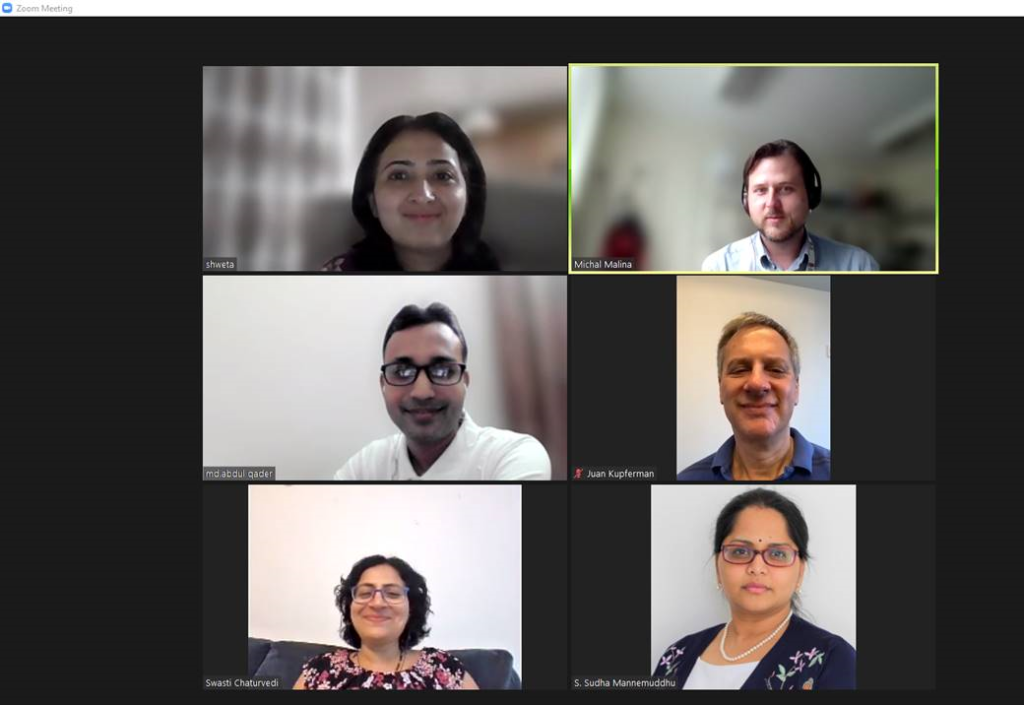 We send time to time an e-mail with a breakdown and summary of every article we discuss at #IPNAJC. If you are interested in getting this e-mail, sign up here. 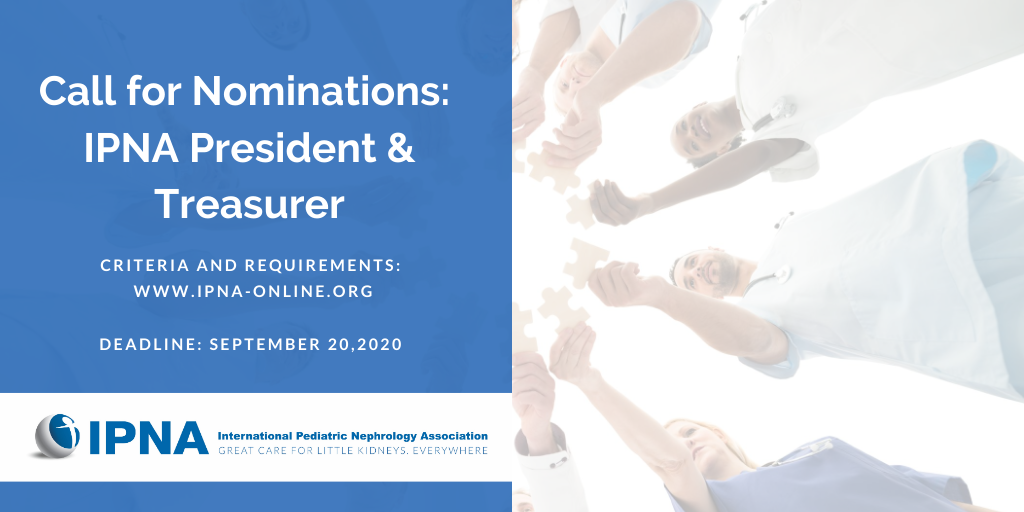